Trig half angle identities or functions actually involved in those trigonometric functions which have half angles in them. The square root of the first 2 functions sine & cosine either negative or positive totally depends upon the existence of angle in a quadrant. Learn more about Trig Identities at trigidentities.info. 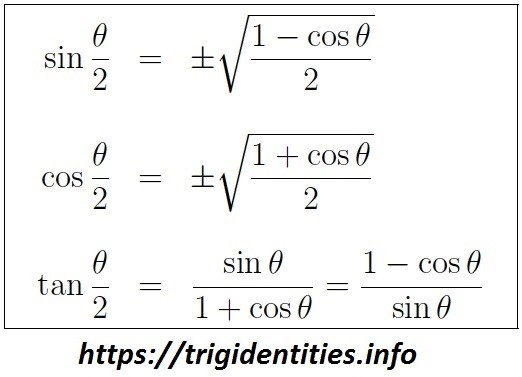 Here comes the comprehensive table which depicts clearly the half-angle identities of all the basic trigonometric identities. Explore more about Inverse trig identities.

Today we are going to derive following trig half-angle formulas.

Now, if we let

then 2θ = α and our formula becomes:

We now solve for

Solving gives us the following sine of a half-angle identity:

Now let talk about the positive or negative sign of Sin (α/2).

Simply by using a similar process, With the same substitutions, we did above. Now we have to substitute these values into the following Trig identity.

After substituting the values We

Now you need to reverse the equation.

Divide by 2 on both sides

let’s talk about the positive or negative sign of Cosine (α/2).