A triangle is simply defined as a three-sided polygon that consists of three sides (also known as edges) and vertices. Triangles are  any closed figure in geometry. 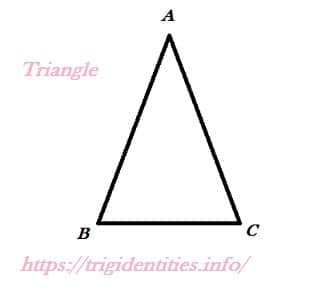 Consider a triangle with its vertices A, B, and C, as shown in the above figure. It is denoted as △ABC.

Angles in a triangle

A triangle is of two-dimensional shape with its three-sided polygon. It has three sides, and all the sides are made of straight lines.

The common point where two straight lines of a triangle meet are called a vertex. That is why a triangle consists of three vertices. Each vertex in a triangle forms an angle.

Example of interior and exterior angles 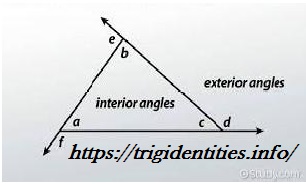 In the figure shown above:

The consecutive sum of e and b, a and f, or c and d will be supplementary.

Properties of a triangle

Every polygon in mathematics has some unique and distinguished properties, making it stand out from the rest. A triangle also has these properties, which are as follows:

Triangle Based on the sides

There are three types of triangles based on their sides.

A triangle whose all sides and angles are equal is called an equilateral triangle. 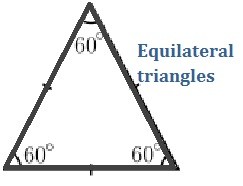 An isosceles triangle is one which has two sides of equal length and one side of unequal length. 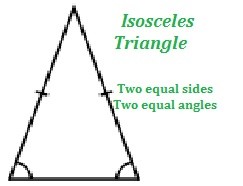 An angle whose all sides are unequal in length is called a scalene triangle.

Similarly, as all the sides are unequal in length, so the angles are also unequal in measure. 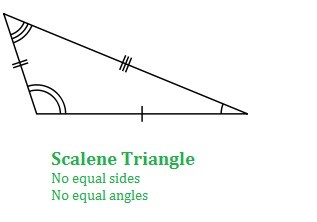 Triangle Based on internal angles

There are six types of triangles based on their inner angles, which are as follows:

A triangle with one of the interior angles as 90 degrees (right angle) is called a right-angled triangle. 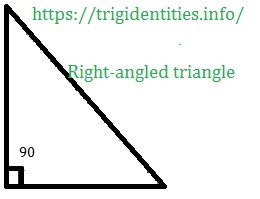 There are some particular properties of right-angled triangles such as:

A triangle with all interior angles of measure less than 90 degrees is called an acute angle triangle.

For instance, an equilateral triangle can be an acute triangle as all the measures of angle are less than 90 degrees. 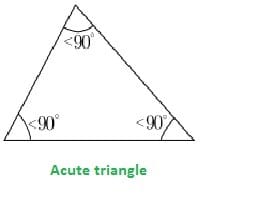 A triangle with at least one of its angles greater than 90 degrees is called an obtuse-angled triangle.

For instance, a scalene triangle can sometimes be an obtuse triangle if its angles are greater than 90 degrees. 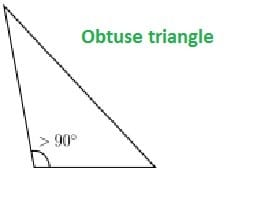 A triangle that doesn’t have any of the angles measuring 90 degrees is called a diagonal triangle.

Acute and obtuse triangles can be an oblique triangle as they don’t have any angle equal to 90 degrees. 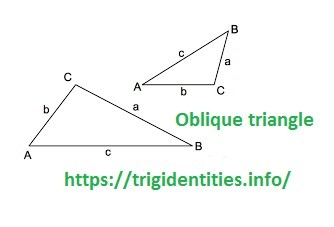